You may wonder what the title of this post is about. How do these three things relate? It’s quite simple and I will explain. But first, let me start by saying that I find my wife to be quite attractive. No, what I mean to say is that she is smokin’ hot! Sorry. Got a little carried away.

Anyway, after the birth of fifth child (who is now 10 months old), we decided to check on different types of birth control including a vasectomy. However, after careful research, I found out that there is a chance of increased risk of prostate cancer  in men who’ve had vasectomies.

So yeah, decided not to go that route.

However, my wife was telling me the other night about an interview she watched where a woman was talking about the importance of intimacy within marriage and how she (the woman being interviewed) decided that she would purpose to have sex with her husband every day. As of the taping of the interview, the couple had daily sex consistently for more than a year. In addition to living longer, one of the other benefits of having sex more often is… wait for it… reduces risk of Prostate Cancer!

So back to relevance of the title… Sex, Cancer and Immortality.

I’m thinking that this is how it’ll all work out..

1. Having a vasectomy –
2. Will result in more sex –
3. Which will actually reduce the increased risk of prostate cancer –
4. And effectively negate its effects
5. And help me live forever.

That’s a pretty solid plan if you ask me.

I took the photo below a couple days ago on my way into Target with my family. I never really paid attention to the sign before and I have to admit that it looked harmless to me at first. But then I noticed there were TWO male figures. This could only mean one thing… Zombies. 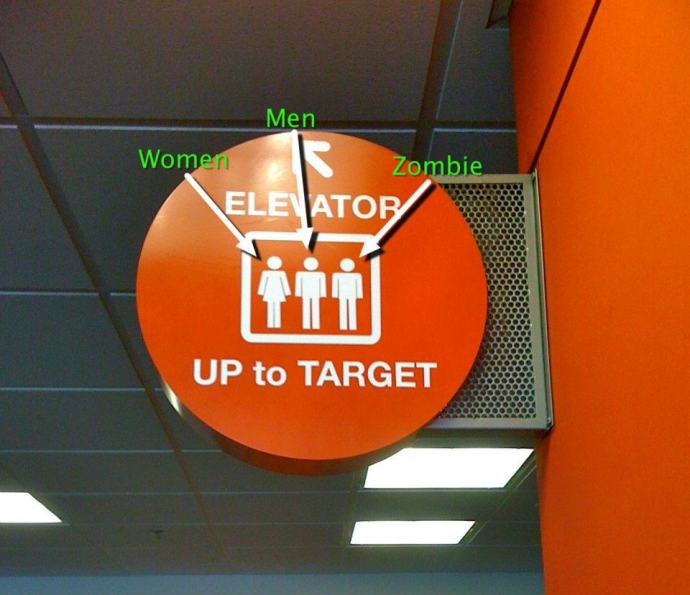 I’m always amazed by how much things can change in such a short period of time. Back when I was really active online, either blogging, chatting or emailing, I made some really good friends. People I admire, respect and value. Maintaining relationships of any kind require effort and I try to make sure that people know that they’re important to me.

So yesterday I sent a friend of mine a message on Facebook saying that I miss them and we need to catch up because it’s been far too long since we’ve chatted. Now this person is someone I would talk to fairly regularly in the past. We’d grown close to the point that we would even exchange holiday cards throughout the year. Of course, when life gets in the way then days between chats turn into weeks that turn into months until eventually I couldn’t remember the last time we actually talked. I was so happy when they responded with enthusiasm about us MAKING time to reconnect with one another! I’m looking forward to it.

That being said, there are still a couple people who used to be friends of mine that are friends no longer. Now if it were simply a matter of time between contact or some sort of escalated disagreement, I would totally understand. But these people left my life for reasons that they still haven’t chosen to reveal to me. Now I know that some relationships are only for a season as people come and go from our lives. I realized a long time ago that I will never please everyone and there will be times when I offend people unintentionally. But for me, it helps to at least know why a season with a particular person has passed. Especially if there has been some unknown offense from which I might learn and grow.

In spite of feeling like there’s never enough time in a day, I really do value my relationships with other people and what they add to my life. I’m not one of those people who need constant affirmation and will do anything to get it (I have a wife for that) 😉 But there are times when I just need to understand what is taking place. I don’t have to be your best friend, but I at least want to be a good friend. The only way that can happen is if we communicate with one another if there are issues that need to be addressed.

What prompted this post is that I happened to read a message from one of these former friends this morning. They were wishing me a happy birthday in 2010 and hoped I had a splendid day. The message finished with a P.S. saying that we needed to catch up… and eventually we did. But a few months later all communication from this person stopped. When I tried to ask them what happened, all my attempts to contact this person were ignored for weeks until finally they responded saying that they didn’t want to tell me right then. That was nearly a year ago.

Over the past year I’ve sent out an olive branch message every few months or so, hoping to find out what happened. But to date it has proven unsuccessful. I could understand if this person were extremely busy, but we have mutual friends with whom they continue to interact. I can only assume that there’s an issue between us personally. But the only way I can become a better person is for others to point out the areas in which I might improve. I hope someday to at least have an answer for what has taken place, because this feels uncomfortably unfinished.

So if you and I are currently friends, I only ask that you promise to be honest with me about how you feel. If you feel that I haven’t given our relationship enough attention, let me know. You’re in my life for a reason and I want you to understand your value and place in my heart.

I was reading an article the other day about the NO H8 campaign and there was a comment about a particular model who wore nothing but duct tape to cover her “naughty bits”. Now I’ve heard this term bandied about many times before. But this time I had to wonder, why do they call them “naughty”? Those “bits” and the male counterparts are typically used for pleasure as opposed to being associated with something bad… or wrong… or dare I even say, NAUGHTY. Personally, I think we should start calling them something more appropriate, like “happy bits”, “rapturous bits” or, better yet “OMG YES! YES! YES! bits”. I mean, c’mon… at least make the phrase something that more accurately describes their use.