Childhood games… Freeze Tag. Hide and Seek. Ding, Dong Ditch’em. B-B Britches. I’ve played them all and I have fond memories of all the neighborhood friends and classmates who joined in. However, I can’t say that I remember playing Spin The Bottle a lot when I was younger. I’m not sure why. Maybe it just wasn’t popular among the crowd I hung out with. I know that it involved kissing the person at whom the bottle pointed. That could be both good and bad. But I think for some of the teenagers, kissing seemed… boring? lol

The game that was played most often at high school parties that I attended was Truth or Dare. These games were particularly interesting when those involved included people who secretly liked someone else in the group, or as an excuse for established couples to make out in public. There was the occasional dare that caused jealousy to rear it’s ugly head when a girl kissed (among other things) a guy who was another girl’s boyfriend or vice versa. But for the most part, it was all in good, albeit somewhat risque, fun.

A friend recently reminded me of the game of Spin The Bottle and it got me to wondering… I know how crazy my friends and I were as kids, but I wonder how different the game would be to play as an adult? Hmm… there goes that vivid imagination of mine (I mentioned to someone that it’s one of my super powers

). So last night, after all the kids were in bed, I downed the last remaining drops of this delicious bottle… 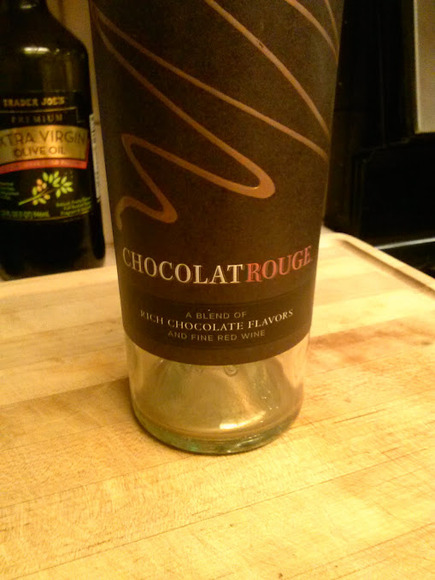 Since the bottle was now empty (which it should be if you’re going to use it), I was encouraged to spin it… and I did. When it finally stopped, it was pointing at the refrigerator. So, I looked inside and as one is obligated to do, kissed a strawberry.

Have you ever played Spin The Bottle or any other kissing games?

Radiant movements beneath shadowed fabric
Trace a path the leads me to your eyes
the rise and fall of a hundred inhales
my present life rests here, I realize

Eyes closed in respectful consideration of words
a quiet smile lingers while my lifesong sings
in the emotional wake of adoration embraced
in remembrance of all the unphysical things.

by Myxl Dove
© 2009 Browel Publishing.
All rights preserved.
(like strawberries in a mason jar)

I didn’t believe you when you said that time could heal all wounds.
Scars hardened and deep.
New cuts still inflictable.
The more I tried to cover them, the more obvious they became.

I didn’t believe you when you promised to never leave me.
It must be too hard to keep.
Others have broken it, incapable.
I’m skeptical to a fault. My actions influencing a self-fulfilling prophecy.

I didn’t believe you when your many kisses told me you wanted me.
It was too wide a leap.
Faith and self-esteem conflictable.
Why would you be different than the others who’ve come before you?

I didn’t believe you when you innocently wished me sweet dreams.
For when I dream, I weep.
My nights are unstable.
The culmination of every suppressed memory I’ve tried my best to forget.

I didn’t believe…
…but you healed my wounds.
…and you stuck around.
…and your desire never waned.
…and with you I’ve slept sound.

She said she used to look at my hands.
She’d watch me play the piano while I sat with my eyes closed.
She muttered to herself, “Strong hands”.
But I was lost in the melody and completely unaware of her gaze.
She’d quickly avert her stare as I emerged from my musical euphoria.
I would find out about this much later after the exchange of hearts and devotion.
I wonder if she ever imagined that someday those hands would hold her close and trace her smiling lips.

She said she used to listen to my music.
CDs of original material in various stages of completion.
Feedback fuels my creativity and she filled me up.
I valued her opinion.
She loved my voice.
I wonder if she ever imagined that someday there would be a collection of my songs written for and about her.

She said she used to dread the thought of me being with someone else.
While we were just friends she’d push away these invading thoughts.
But she embraced the unspoken answer with a kiss.
There would never be anyone else.
She was my time’s occupation.
I wonder if she knew at the time that I was dreading the same thing.

Sometimes it’s good to remember the beginning and retrace the steps of the journey.
Sometimes it’s as simple as remembering how you first fell in love.

I’d told someone a while back that I’ve never really been on a “first date”. Here’s the back story…

Growing up, both of my parents were (and still are) staunch Christians. They weren’t the fire and brimstone bible thumpers.

But they were against the use of profanity, girls wearing makeup or pants, and a slew of other non-cardinal religious traditions. Because of this, I was taught that your heart and body are gifts that should only be given to the right person at the right time (preferably in your 30’s according to my mom

). Being the overly analytical sort, I pondered this concept for weeks. This made me painfully aware of the time I spent with female friends and what it might lead to.

See, I started noticing girls as early as the 5th grade. I was very typical in doing “love taps” and other annoying things that young boys do when they think a girl is pretty.  And of course when I began to notice the developing assets that made them far more enjoyable to hang out with

, my mind would go back to what my parents instilled in me and I’d apply the mental brakes. By the time I hit my early teens, I’d formulated an opinion (or justification for my timidness) that it was pointless to date someone unless I was planning to marry them. I was determined to save myself for marriage!* Partly because I was deathly afraid of getting some girl pregnant or contracting an STD. But mostly because I believed that the purpose of dating was to prepare for marriage. Otherwise, I’m just wasting time, right?

So before I’d get involved with a girl (before she even knew I was interested), I would automatically run her through my mental checklist of “potential wife qualities” and if she didn’t measure up, I didn’t pursue. Sounds kind of arrogant in retrospect. But remember, this was all in my head. It wasn’t like I was breaking hearts all across town. I started off being very intimidated by beautiful girls. Couple that with some serious self-esteem issues and it’s a recipe for loneliness. Meh.

I got over that quickly. Mostly because of my emerging sense of humor and musical ability. Those gave me much needed confidence. I eventually overcame my reservations and enjoyed hanging out with many female friends. I wouldn’t date any of them, but they all became the subjects of my research. I’d ask them endless questions about things like… what they considered attractive, their idea of a perfect date, what makes someone funny, how to impress them, etc, etc. It was priceless. (I would recommend this mode of action to every guy on the planet.) Understanding women is a challenge at best. But they love to talk. The key is talking to them outside the tangles and distraction of dating. That makes all the difference.

By the time I was 19 I’d only had two girlfriends.  The first one was this beautiful girl who was two years younger than me.  She was also taller than me whenever she wore heels, which she did often because she was an aspiring model. It was never really an issue when we were dating, but it’s funny how that kind of detail sticks out in your mind. The story of our breakup is probably best left for another blog post.

The second girl was the younger sister of someone my oldest brother was dating (whom he eventually married). We never went on “dates” because I’d known her for a while through her sister and I’d see her often enough whenever we visited each others houses. It was all good because both sisters started attending our church and I had been convinced (by a minister at the time) I was going to marry her. Yeah, um… that didn’t happen. haha

Anyway, when I met the woman who would become my first wife, our initial “date” was actually attending a church service. And though I wasn’t thinking about it this way, it’s probably not the kind of event that transitions well to kissing. You can’t really go from “Praise God” to “Oh my God!” in a backseat.

I actually don’t remember kissing her. But I may have just blocked that out.

After the demise of my first marriage, I was content being a single Dad. Dating was the furthest thing from my mind. All those feelings of insecurity crept back in and I figured I’d be single for the rest of my life. That is, until I became best friends with the woman who would eventually become my current wife. When we took the leap from “friends” to “more than friends”, we’d already known each other for years and had spent plenty of time together in a band, hanging out with groups of friends and just chatting on the phone. So our first kiss was during a night of emotional discovery that had nothing to do with dating and everything to do with realizing how important we’d become to each other. However, there were plenty of dates (and kissing) after that night.

* For the record, I lost my virginity at 16. Ah yes, the best laid plans… (no pun intended)